As an online food ordering and delivery platform in Australia, Uber certainly needs a sufficient number of delivery persons to fulfil orders from customers who continue to grow around the country. Moreover, Uber Eats is still controlled the highest majority of market share according to the CBRE report.

With a sufficient number of delivery drivers, Uber Eats will become the most reliable platform. Because their customers will get assigned to a delivery driver faster, which means customer orders will arrive a lot quicker and in good quality, not cold or soggy.

There are several challenges for Uber Eats to become a reliable delivery platform in Australia, one of which is the increasing number of competitors in this industry. Uber must be able to convince their delivery persons to continue to deliver with their platform, at least they are expected to prioritize Uber if they deliver on several platforms.

One of Uber’s efforts to retain its delivery drivers is by offering trip promotions, supplements and incentives. In the following, we will try to explain more about this. How it works and how much is usually offered to delivery persons in Australia.

A quest is a promotion that an Uber Eats driver will get when they reach certain delivery goals. So the driver must complete certain delivery trips at the starting point and timeframe that has been determined in order to be eligible for this promotion.

The number of delivery trips that must be completed and the amount of bonus that will be received are different for each delivery person. Some get a quest with a good amount of dollars, some get a standard value.

No one knows in detail what factors determine the quality of the quests that drivers get. However, some people say that the quality of a quest is determined by working habits. Like how many hours do you work each day, where do you usually start work and some of the trips you managed to complete in the last few weeks.

The purpose of this incentive is to encourage delivery persons to be more active in accepting and completing their deliveries. In addition, drivers are also expected to continue to make Uber their main gig platform compared to its competitors, because as we know some drivers work more than delivery platforms.

Here are some examples of Uber Eats Quests obtained by delivery persons in Australia. 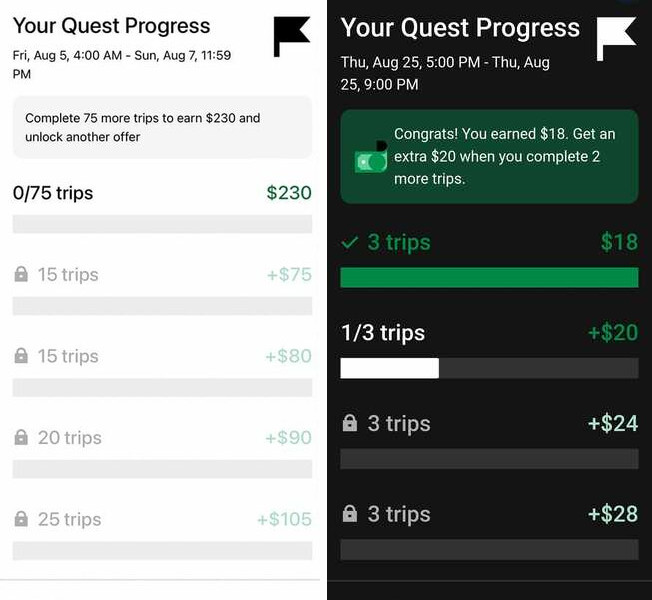 Boost promotions are a great way to maximize delivery driver earnings potential. Drivers have the opportunity to multiply their base pay by the multiplier displayed in that Boost zone. For example, with a Boost multiplier of 1.5x, a trip that typically earns you $10 will get you $15, with a breakdown of a $10 base fare plus a $5 boost promotion.

For more complete information about eligible locations and times, drivers can take a look at the Promotions section of the app. However, delivery drivers can also check the running boosts directly from the live map in the driver app. If an area is included in the boost zone, drivers will see a multiplier number with an arrow icon next to it.

Every delivery request that takes place from those areas may be eligible for boosts promotion. You can get information about how much boost promotion you got in the trip details, which can be seen after completing the trip.

In Australia, Uber boost’s multiplier varies in each area based on several factors that have been determined by the company. The most common boost multiplier is 1.1x – 1.3x, but some drivers also get higher multipliers like 1.7x – 2.0x.

The following is an example of a Boost promotion inside the Uber driver app. 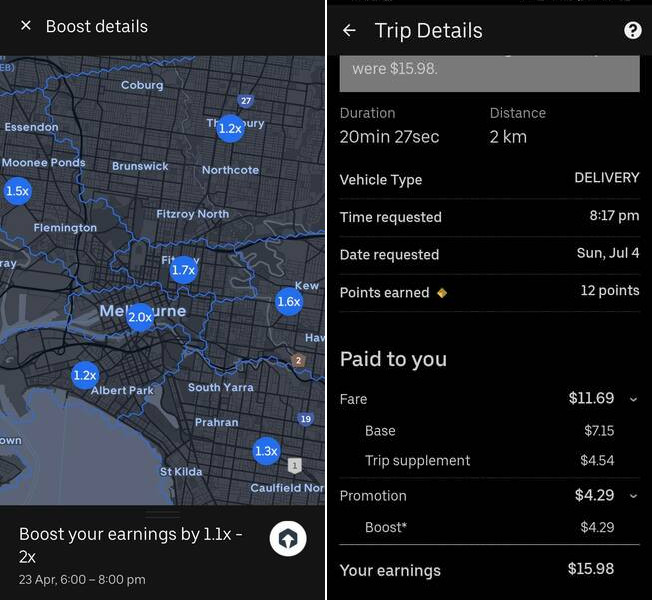 In our viewpoint, a delivery surge is a kind of incentive to motivate or encourage delivery persons to go online and deliver more in an area, especially during times of high demand. A driver has the opportunity to get more orders and earn more during this period.

Unlike other forms of promotion such as Boost and Quest, delivery surge takes place in real time. This happens when restaurants in an area receive a lot of orders but there aren’t enough delivery drivers to deliver the order.

When you get an order inside the surged area, the surge amount will be displayed once you complete it, you can check the trip details in the driver app. For example, you got a normal delivery request with a $10 base fare, but since the trip starts from the area with a $3 Surge, your updated earnings amount would be $13. 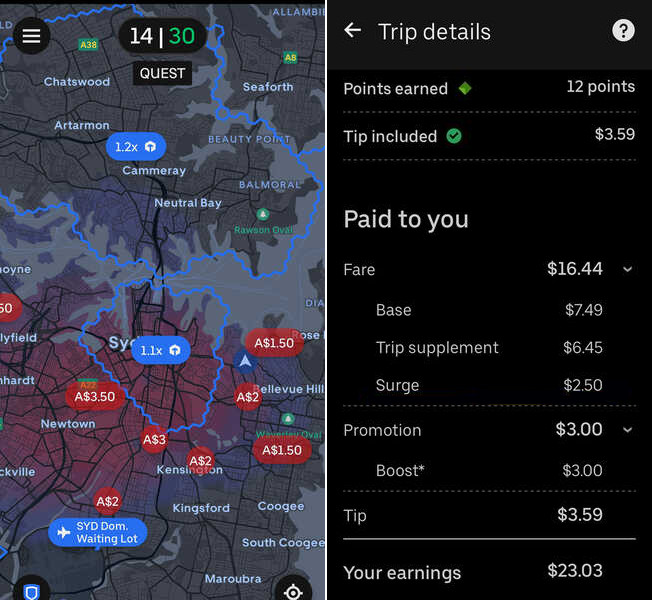 In addition to the incentives and promotions that we explained earlier, Uber sometimes also provides a Trip Supplement which will increase the total paid fare for drivers. When you are eligible for this trip supplement you can see it inside the trip details when the trip is completed.

A trip supplement for Uber Eats may apply to a trip in addition to the base fare. A delivery person may take this supplement in cases of unusual road conditions such as traffic jams, longer wait times than expected at restaurants or stores, and delivering in areas with limited availability of delivery drivers.

In essence, a trip supplement helps to make every delivery worthwhile, so that drivers are more excited to accept delivery requests and complete them. 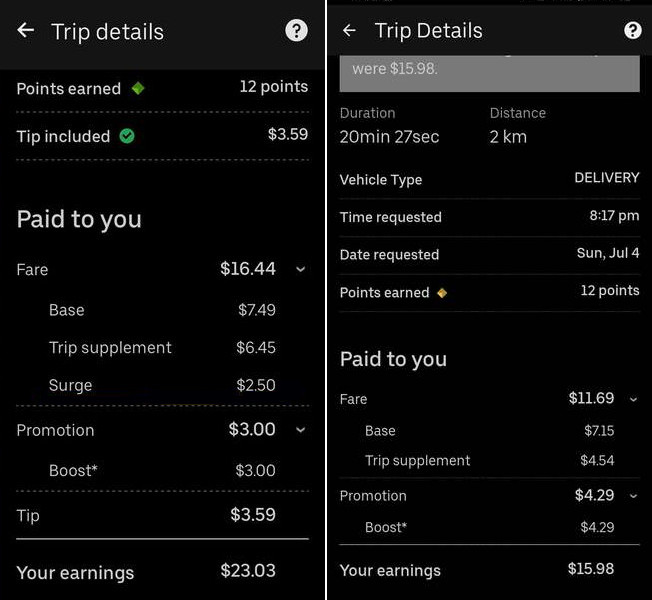 Uber still has another hard-to-refuse special offer for delivery drivers. This kind of promotion is in addition to your regular fares, boosts, and quests you may have. If you are eligible for this special offer then you will get an email or in-app notification about this.

This special promotion is offered in several forms, some are similar to a Quest which requires you to complete several trips to earn extra dollars. For example, an email received by a driver said that he will receive an additional $500 after he completes 100 deliveries within a specified time.

In addition, sometimes special offers are also offered in the form of guaranteed earnings. For example, you will earn at least $1,420 after completing 125 deliveries within a certain time, if you earn less than that, you will get the difference. 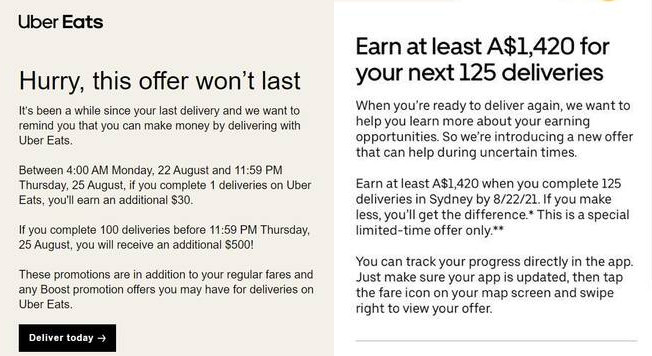 We have not been able to get information about the criteria to be able to get this special promotion. However, based on the contents of the email, it seems that this promotion is only for delivery persons who is not actively delivering with Uber Eats for quite a long time. And only Uber knows how long it will take until a driver is offered this special offer.

A new driver promotion campaign seems to have rolled out for Uber drivers in Perth. Some partners in the city have received an email from Uber stated that they are eligible for a new promotion Read more…