The Chinese ride-sharing giant Didi finally launched its services in new cities and regions, Gold Coast and Sunshine Coast starting September 23, 2019. Didi opened services in both cities or regions after about two months ago officially introduced its services in the Queensland capital, Brisbane.

The city and region were chosen most likely because both of them are quite lucrative rideshare markets besides their position in the top 10 cities with the largest population in Australia.

In the Gold Coast and Sunshine Coast there are already operating several rideshare companies,.Uber as the largest and market leader in the country, then followed by the Indian-based company Ola which has been operating for more than a year in a number of cities in Queensland. You can also find a couple of local rideshare companies such as Shebah which also operating in both cities.

Didi did a number of different things to compete with established rideshare companies in both cities. To attract new drivers-partners to drive on their platforms, they put on lower commission fees compared to the two previous companies. They charge a fee of 5.5% including GST, significantly below competitors who variety between 25% – 15% of the total fare excludes tools and government charges.

For users of its rideshare service, they also have a slightly lower rate than their competitors. This is a strategy that fits their tagline, low-fare rideshare. The following are Didi rates in GC and SC Queensland:

Here are the screenshots of the rate details from the Didi app. 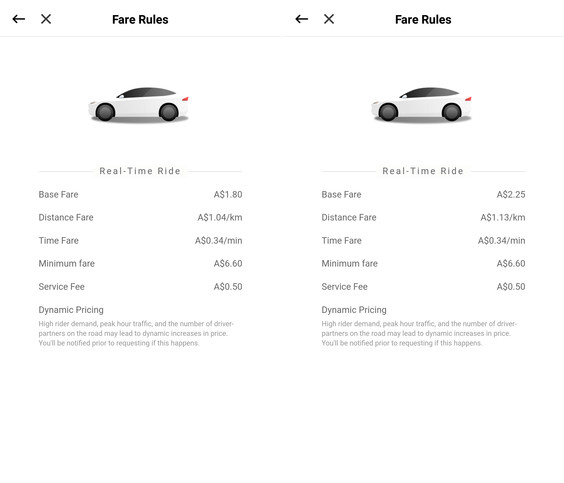 Additionally, they also often provide special discounts available as promo codes that can be used for new users and existing users on their platforms. For more details, you can read the post about Didi promo code in Australia.

Furthermore, Didi also provides opportunities for locals in both cities and regions to supplement their income by driving for their rideshare platform. If you are interested Didi driver in Gold Coast and Sunshine Coast, you can prepare several documents including the Open Driver License, Driver Authority (DA), Booked Hire Service License (BHSL), Certificate of Inspection (COI) and several others. For more details, you can read in our post about Didi Driver Requirements Queensland.

If you already a driver for another rideshare company, you might be able to sign up without difficulty, since you already have most of the requirements in hand. But you have to make sure all the required documents remain active or not out of date.