Didi is a new player in rideshare business across Australia, coming in 2018 with Melbourne as their first city. The Chinese ridesharing company must compete with several other global on-demand online transportation companies, such as US-based Uber which has been operated since 2014 and India-based Ola which were present in the same year as Didi.

To be able to compete in Australia, Didi promoted his application as low-fare rideshare. They have dropped rider fares several times. The latter is revised fares in Brisbane, down about 10% lower than before.

In addition to reducing ride fares, to attract rideshare users they also promote services through the most common methods used by similar services, giving their users or potential users promo codes that will cut the total cost of the trip.

You will often find promo codes for new Didi users since they are the main target of this promotion. Only for those who have never tried to hail Didi in Australia before or existing riders from other rideshare apps.

New user promo code can only be used once and only for those who have never ride with Didi. You can’t use the promo code below if you have trip history on your app.

Screenshot when the code used. 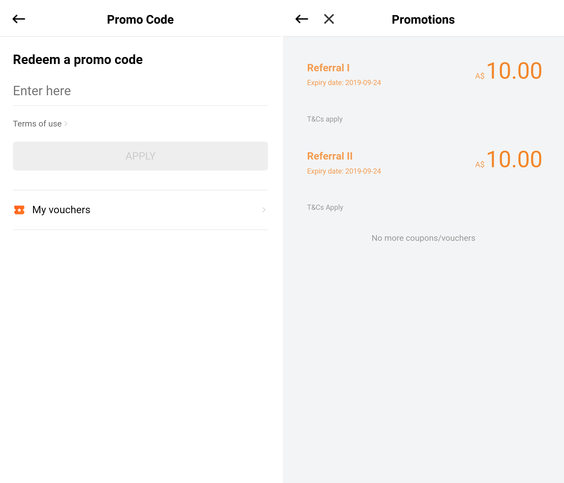 Existing users sometimes also have the opportunity to get a promotion. Usually, promo codes for existing users are provided exclusively to some users through in-app notifications or via registered email, and these codes are not freely published on the internet.

This type of promo code is sometimes given when Didi participates in certain events in your city, such as the Night Noodle Market in Brisbane, where they have their own tent at the event that is called Didi Pitstop. You might also be able to find it on the official Didi social media page like Facebook or Instagram.

Unfortunately, since Didi rarely issued this kind of promo code, or it may be only given to certain users, we have less valid and working Didi promo code for existing users to date. But we will update the post and put the code here if one day we discover it.

What is Didi Voucher Code

Didi vouchers is a piece of text that can be redeemed to discount your total ride costs with Didi. You can get promo codes from various sources, such as from your friends, Didi promotional emails, websites or blogs that you can find on the internet or even directly from the Didi driver-partner that you are travelling in.

Generally, the current promo code in Australia is worth a maximum of A$20. It can be used at once, or split into sections, such as 2x A$10 or 4x A$5.

As an illustration, you get an A$20 promo code which is divided into two (2x A$10), then you make the first trip with Didi for a total fare of A$30, at the end of the trip, you will only be charged A$20. Whereas another A$10 applies for your next trip.

When I can use Didi Promo Code

The Didi coupons and promo codes that you find here mostly can be used wherever Didi’s ridesharing service is available in Australia. Didi referral code or also known as Didi free ride is included in this type of promo, a code that can be used anywhere as long as it’s still within the country.

As you may know, the Chinese rideshare company has been found in 8 cities around the country with Sydney as the newest city launched in March 2020. Previously, the company has served in several major cities such as Melbourne, Brisbane, Perth, Geelong, Newcastle, Geelong, Gold Coast and Sunshine Coast.

If you are unable to make use of the voucher code that you find here, it’s possible that the code you will use is a targeted promo code for use in certain cities. You can see the additional information in each promo code. So, a Didi Brisbane promo code that targets specific customers in the city cannot be used in other cities like Melbourne and vice versa.

What is Didi Free Ride

A ‘free ride’ is a phrase popularized by Uber as the first ride-hail company in the world to promote its services to new users on their platform. Even though it’s called a free ride, but actually it’s not completely free, because there are still limitations on the promotion value.

At this time, the maximum value of a rideshare free ride code in Australia is different for each company, ranging from $5 – $20 for each trip and some of the code can be used multiple times.

For Didi free ride, the promotion value that you will get is mostly $10 for a referral code that you can use for 2x rides, so the total value is $20. But sometimes they also provide a lesser value but with a greater total discount value, such as $5 per trip that can be used up to 10 times.

How to Use Didi Coupon Code

To be able to redeem a promo code on the Didi Rider app, you can access it via: