In order to remain competitive in the competitive Australia ridesharing business, Didi should continue to try to be different from the existing ridesharing services, which already started with a lower fare.

In addition, they also continue to adapt their services according to customer needs and market conditions. They did this by launching the most economical service – Didi Share and affordable 7-seater rideshare Didi Max.

Stepping into 2020, Didi delivers several new feature updates on their rideshare services in Australia, by launching the most requested features, upfront fares and unmatch drivers in January 2019.

The first is the upfront fares feature, an exact price or exact amount the rider will pay for a trip with Didi. This feature was put into practice in Brisbane and it is likely to be carried out in several cities across Australia. Now they still closely monitoring and adjusting fares to ensure it’s fair for all drivers.

The feature is very beneficial for riders as they can find out a trip’s exact price before they request it. Previously, when requesting a ride with Didi, riders would be shown an estimated fare that could change according to the route and road conditions. 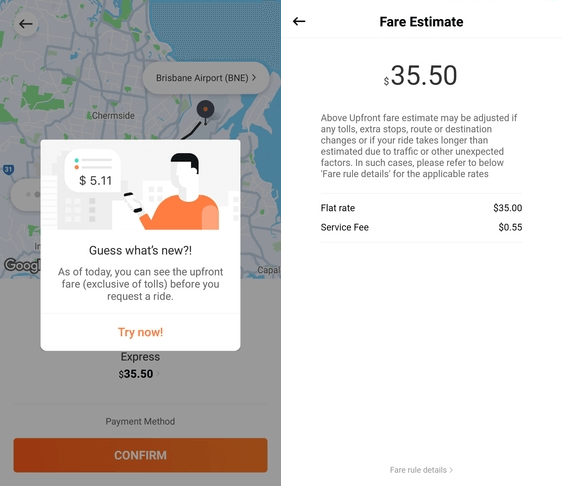 Just like a common trip, an upfront fare also takes distance, time and traffic into account. The difference is that small changes to the route and trip time will not affect the upfront fares.

Although this seems to only benefit riders, this feature has also been designed not to inflict financial loss to its driver-partners. They have designed the upfront fares feature so it should not result in driver lower earnings.

This is done by calculating a trip fare in real-time so that unexpected detour in peak hour traffic or due to road closures will result in a fare change for the rider.

Beginning in January 2020 Didi will also launch a new feature in the driver app, unmatch rider-driver. This feature has been tested in Melbourne which is likely to be launched for every driver-partners around the country in the near future.

If this feature is available in your city, you will find an unmatch button after you complete a trip. This is very useful for drivers who don’t want to be paired with particular riders for any reason, including but not limited to rude riders or passengers who create a mess in your vehicle.

Until now, we don’t know whether the unmatched feature will also be available for Didi riders. Because this feature is also very useful for riders who do not want to be re-paired by a certain driver for whatever reason.