The presence of Ridesharing service in New Zealand was marked by the entry of Uber in 2014 through Auckland. It was the first and the only private car booking service in the country at that time.

After more than three years of being the only ride-sharing service in the country and operating without any significant competition, another ride-hailing company finally arrived at the end of 2018. An Indian-based company, Ola began operating officially at New Zealand in November 2018.

Currently, Ola can only be used in three major cities in the country. But there is still a possibility that the number of cities served will continue to grow, at least in cities where Uber is already there to be able to provide ride-hailing options to the public.

With the availability of this service, travelling around NZ is no longer a pain. We can order a ride in every corner of the city just by using our smartphone. Because of this convenience, rideshare became one of the most popular transportation options.

As we mentioned before, there are two major ride-hailing companies that have been officially registered in the country. Uber began in 2014 and followed by Ola at the end of 2018.

We haven’t heard about the plans for other ridesharing companies that will expand in NZ. If indeed there will be a new company that will open its services here, then it is likely that companies that have been operated in Australia such as Bolt (formerly Taxify) and Didi.

Where is Ridesharing Available in NZ?

Currently, you can book a ride with Uber and Ola in several cities in NZ. Some cities where ridesharing service is available are an urban area with a high population around the country.

You can book a ride easily in Auckland, which is the largest urban area with more than 1.6M urban population, and Wellington which is a capital city as well as a second populous urban area of New Zealand.

How much does Ridesharing Cost in New Zealand?

One of the reasons why the ride-hailing app is very popular in NZ is because the fare is cheaper compared to conventional taxis. The app is very easy to use and you don’t need to pay your ride with cash.

To find out how much it costs, we try to make an order at Auckland Airport (AKL) to the City Center by using two ridesharing applications available here, Uber and Ola.

We decide to plan a 30 km trip which can be reached in about 40 minutes with heavier traffic than usual. The distance and duration are estimates based on Google Maps.

With a pick-up point at Auckland Airport and a drop off location at the Countdown Metro Auckland. The Uber ride costs NZ$47.78. As for Ola, the ride is estimated to be NZ$53-54. Please note that the trip fare may vary according to the condition on the road and the trip duration. 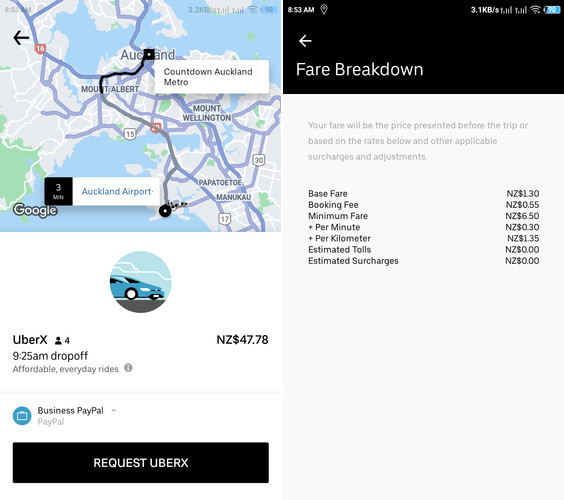 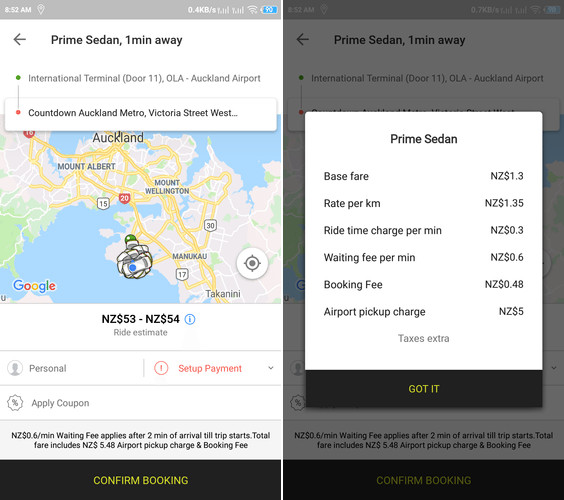 For more details about this, we will write it in a separate post, which explains about ridesharing cost in each city in New Zealand.

How to Become a Rideshare Driver in New Zealand

There are several requirements for those who want to become ridesharing driver-partners, this applies to Uber and Ola applicants. Both of these ride-hailing companies have similar requirements.

Not only the rideshare company who determined the requirements for applicants, but there are several requirements added by the New Zealand Government through the NZ Transport Agency. Through this requirement, the NZ Government wants to ensure the passenger feel safe when they use rideshare services.

Applicants are required to provide Personal Documents such as Driving License (with P-Endorsement) and ID Card. Besides that, your vehicle must also be equipped with Vehicle Registration Certificate, TSL (Transport Service License) Label, CoF (Certificate of Fitness) and Vehicle Insurance Certificate.

We will write in more detail about how to become rideshare driver in NZ on other writings on this website.