Located between the areas of hills and ocean, Adelaide is really fast to be the centre of lifestyle in Australia. This elegant city is famous for its wine and great culinary shown by numerous bars even in the city corner. Aside from that, there are surely still so many tourism spots available here. What are they?

Ridesharing Fares in Adelaide Airport and the City Centre

The rideshare service was first used in Adelaide with the arrival of the San Francisco-based company called Uber in 2014 along with several other major cities in Australia.

Uber already operated for more than four years, making it the most popular and widely used ride-hail service in the city. Not only Uber, right here you can find several other ride-hail companies that provide similar services. Among them are Ola, a ride-hailing company from Indian, who started entering Australia in 2018 and try to disrupt Uber’s dominance in the country.

You can hail a ride almost anywhere in the city, from the Adelaide city centre to the Adelaide Airport (ADL), and the other way round. 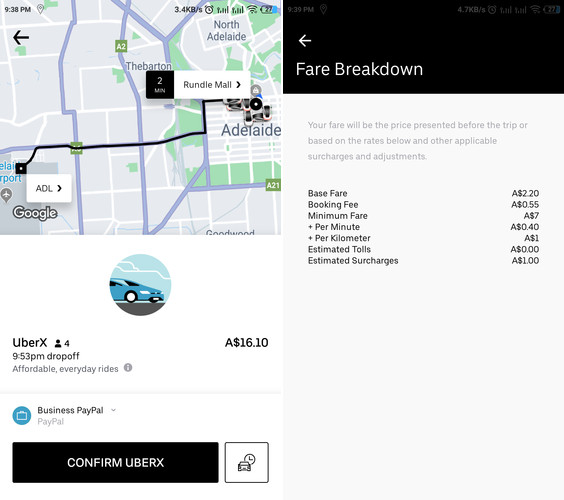 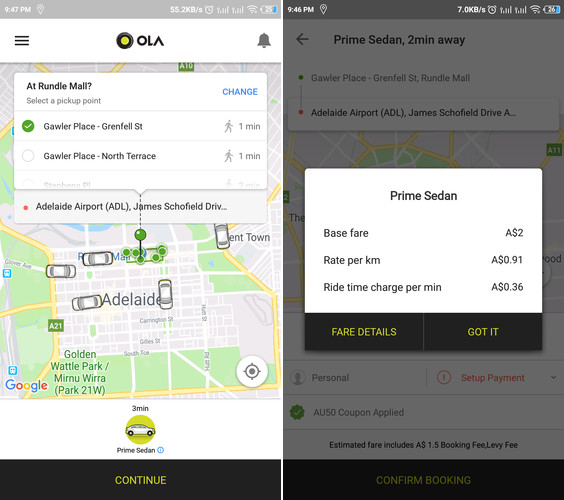 Planning to take a ride with Uber or Ola in Adelaide? Don’t be concerned about the fare, since the rates are lower than the regular taxis. You can find the estimated fare right before you book your ride.

The following is an example of ridesharing (Uber) estimated fare from Adelaide Airports (ADL) to several locations within the city:

One of the advantages of rideshare service is that you can find out the estimated fares that will be charged to you right before the trip begins.

In case the fare is one of the reasons for you to not ride with Uber or Ola, you may make use of the following coupon/promo code which could cut the total expense of your next trip.

Need additional cash for your family or investing in the future? Becoming a rideshare driver could make you get extra dollars without the need to depart from your current job.

The best thing driving with this kind of company is flexibility, you can choose your own schedule to work outside your current job. Decide on when you drive, where you go, and who you pick up.

Uber and Ola open chances for everyone in Adelaide who is want to drive with them as a driver-partner. Absolutely no working hours, No boss, you are free to drive online at any time.

Ridesharing as a compliment for Adelaide Transportation System

If you stay less than three days in this city, you can purchase MetroCard Visitor Pass to pay the transportation fares. The card can be used as a payment method for every means of transportation under Adelaide Metro’s control.

But if you plan to stay for more than three days, it is better to purchase the MetroCard because the price is much cheaper. If you use the bus, besides using Metrocard, you also can purchase the MetroTickets directly from the bus driver.

If you want to get the real Adelaide experience, make sure to take the tram at least once. The tram runs from Glenelg, passing the beautiful Glenelg beach, to Adelaide Entertainment Centre.

A free tram is even available from Adelaide Entertainment Centre to South Terrace and Brighton Road & Moseley Square to Glenelg. If the tram doesn’t reach your destination, then you can take buses or trains instead.

If you miss the trams, buses or trains, don’t worry because public transportation in Adelaide is not only limited to those three. You will not be stranded without a way home in Adelaide. There are many taxis in Adelaide and you can hail them anytime, especially if you are currently in the busiest parts of the city.

In Friday and Saturday night, a supervised place to wait for a taxi is even provided. While it is easy to hail a taxi in this city, you might want to consider to book the taxi beforehand if you need to arrive on time.