Located in the South Island of New Zealand, Dunedin is the second largest city by population on the island after Christchurch. There is the oldest university in New Zealand, the University of Otago. No wonder if UNESCO designated Dunedin as a City of Literature.

Uber in Dunedin City Centre, Railways Station, Airports and the other

Uber is a newcomer in the city, this ridesharing company officially announces it in May 2018. As a newcomer in ride-hail service, there may not be many drivers-partners hanging around the city roads. Mostly, it can be found only in city centres, universities or other urban centres.

But don’t worry, in the next few months, you will find it easier to get a ride even in the suburban area. Since Uber continued to promote to get more partners to serve the city.

For Airport Pick-up, unfortunately, until now we have not been able to use get a ride at Dunedin Airport (DUD). When trying to book a ride at the airport area, just like in Hamilton. You will see this caution, “Uber is currently unavailable in your area”.

Most likely related to regulations at the airport for passenger pickup. But you can still use this Airport as your destination via the app. Based on experience in other cities, there will be no problem to drop off rideshare passengers here. 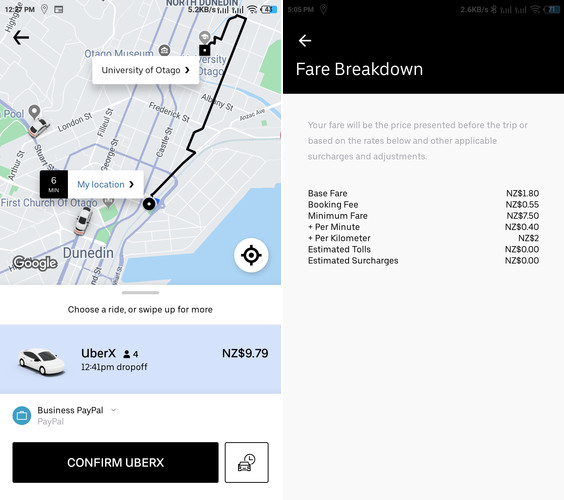 If you are interested in trying Uber Dunedin, here is the fare breakdown:

Here is an example of Uber fare from Dunedin Railways Station to another:

Still doubt about using Uber? You can use the promo code below to try the convenience of booking a vehicle to moving around Dunedin. By using the promo code, you will get a discounted price when using the service for the first time.

Driving for Uber in Dunedin

In addition to getting a ride, you can also help the city by providing a comfortable ride while getting additional cash of course. Its offer flexible working time does not require you to work at certain hours. You can drive anytime you want it.

Uber as a compliment for Dunedin Transportation

As one of the cities with the largest population, of course, this city has a good public transportation system. The following are some of the public transports that you can use when visiting Dunedin.

You can pay the fares by cash or using the electronic ticketing known as GoCard. GoCard is operated in 2007 and it is helpful for them who use this service regularly. Some benefits are found by using GoCard including the total payment which is less than by using cash. Of course, if you only visit Dunedin for a few days, cash payment is much better.

Taxi. Your destination is probably not bypassed by the bus line and route. You should not worry, here is a good alternative even you must pay more for this. It is a Taxi. There are some companies that provide this service in Dunedin; they are Dunedin Taxi, Nab-a-Cab, Green Cabs, and City United Taxi.

Services via phone line are available so that you can order it before using it. Meanwhile, you can also find them on the taxi stand for sudden needs.

Train. The train is surely not for transportation within the town. It is although you can choose it if the trip is a little bit longer and the destination has the station around.

Particularly if you want to leave Dunedin using this transportation means, you can enjoy the landscapes around. Yes, Dunedin is surrounded by beautiful areas to be enjoyed.

Uber. Similar to conventional taxis, with Uber you can reach every city corner where other transportation does not pass. Amazingly, you don’t need to call to be picked up, you just need to sit and order directly from your smartphone.