Ridesharing in Auckland – The Fare, Availability and Promotions

Auckland is the biggest city in New Zealand. The city has a big population that is why this city is known with high mobility. There are three types of public transport in Auckland if you intend to moving around, you can choose between buses, trains and ferries.

Those transportations cover the whole area of the city and the fares are also pretty affordable. You can purchase an AT HOP prepaid card for easier payment system in all transport systems in Auckland. But if you don’t want to purchase the card because you only stay for a couple of days in this city, you also can pay it in cash.

Rideshare Fare in Auckland, Airport and the other

Uber as a ride-hailing service has been existed in New Zealand since 2014, at that time, Auckland was the first city in the country where this ride-sharing operates.

Having been in operation for more than four years and recruiting more drivers, we can make sure that you can book a ride quickly. This can be seen from the waiting time for pick-up which is less than 4 minutes on average.

In this city, you can also find another ride-hailing company from Indian, called Ola. This rideshare company arrived at the end of last year along with two other cities in New Zealand.

You can get a rideshare ride virtually anywhere in the city, from the Auckland city centre to the Auckland Airport (AKL), and vice versa. 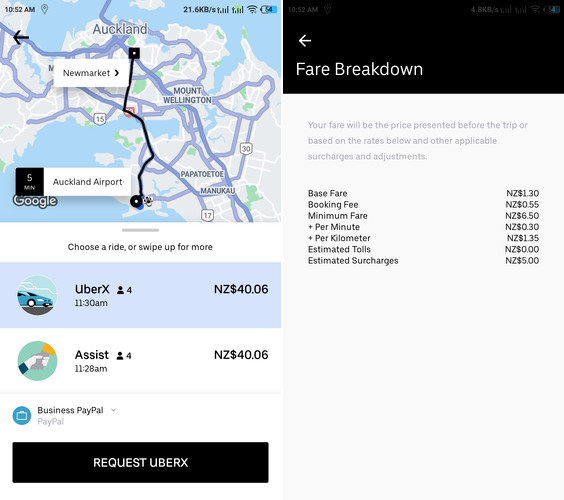 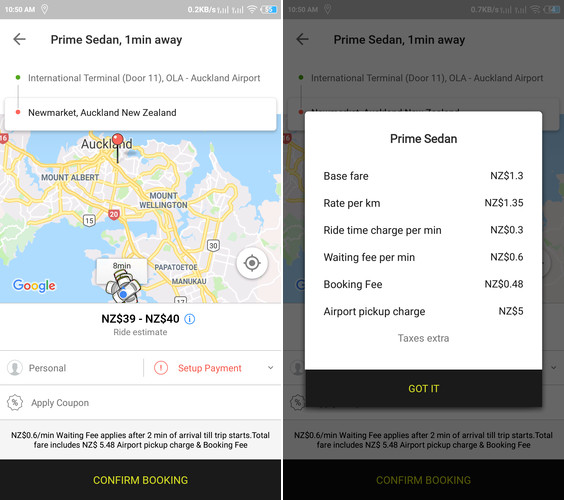 After you select a destination, the rideshare app will automatically estimate and display the fare. However, if the destination changes, or if your trip takes longer than estimated due to traffic or other factors, the rates will be based on the fare breakdown below.

Besides the fare breakdown we have mentioned above, there are some additional fares depending on the pickup conditions and location.

Waiting fee is an additional fee triggered after the driver arrives and wait (usually around 2 minutes) at the pickup location. Uber imposes the waiting fee varies by location, the fee does not apply for pick-up in some venues such as Airports.

The following are some examples of ridesharing (Uber) fare in Auckland from one Auckland Airports to several destinations:

*All estimated fares provided are subject to change due to rides demand and other factors.

For those who are curious about ride sharing in Auckland or just want to know how it is working in the city. You can try to download and install the Uber or Ola app then use the promotional Promo Code in Auckland and other cities in NZ.

No matter you are, New Zealand citizens or tourists, you can still download and use the Uber application in the city.

Driving for Uber or Ola in Auckland

Need more money for supporting your family or saving for the future, Uber can make you get more money by being a Uber driver. There are some benefits to get when you apply as an Uber driver.

The main thing is flexibility, you can choose time to work outside the common 9 to 5. Choose when you drive, where you go, and who you pick up.

Ridesharing as a compliment for Auckland Transportation

Auckland has so many beautiful places to visit. If you love travelling and have a plan to visit this mesmerizing city, here are some transportation options in the city

Bus. Travelling in Auckland is easy, even for foreigners. The first is by bus, if you want to get around the city centre, simply hop to the red CityLink buses. If you travel around the inner city, then you have to ride the bright green InnerLink buses.

But if you travel around the inner suburbs, then you should get to the yellow OuterLink buses. The frequency of the bus is around every seven to fifteen minutes. On the weekends, the buses operate until late at nights.

Train. Besides buses, you also can take the trains if you need a faster ride to get to your destinations. Before going to the train station, you might want to check the schedule first to make sure you can catch the train you want.

There are times when the trains are not running due to scheduled maintenance. You don’t have to worry about this because replacement buses will be provided to take passengers from station to station, just like the train.

Ferry. For those who want to take a break from the hustle and bustle of the city life, taking the ferry can be a really nice idea. The ferry is also the best public transport in Auckland if you hate traffic and want to see the beauty of the Hauraki Gulf.

The fare depends on the length of your journey. Most of the ferry terminals also have connecting bus service that will take you to the other part of the town easily.

Ride-sharing Service. In addition to the three public transports, there is other available alternative transportation in Auckland, ridesharing service provided by the transportation network company. Very useful if you don’t have time to go to the closest station, or wish to travel directly from in front of the door or lobby.