After being delayed for a quite a while, Didi finally confirmed that their rideshare service would come in Sydney quite soon. The arrival of the Chinese ride-hailing giant in the capital of NSW will be the biggest for the company. As they will enter the most potential rideshare market in Australia, a city which is home to more than 5 million Aussies or more than 20% of the national population.

In March 2019 Didi chose Newcastle as their first city in the state of NSW and bypass Sydney. In those days, many hoped that the low-fare rideshare company would also open its ridesharing business in the state’s capital. As the arrival of the new ride-hail service is expected to provide an option to travel from point A to B in the city.

In addition, when a new service is launched in a city, they often come up with several attractive promotions for new customers. Based on the previous new city launch, Didi might also offer special offers such as a $20 free first ride voucher when they arrived at this city.

When officially operating in Sydney later, Didi will be struggling with a number of existing ride-hail services. There are two companies that lead the market, the largest is Uber, which has been operating for more than 5 years in the city. Another competitor is Ola, an Indian company that has been operating since 2018. 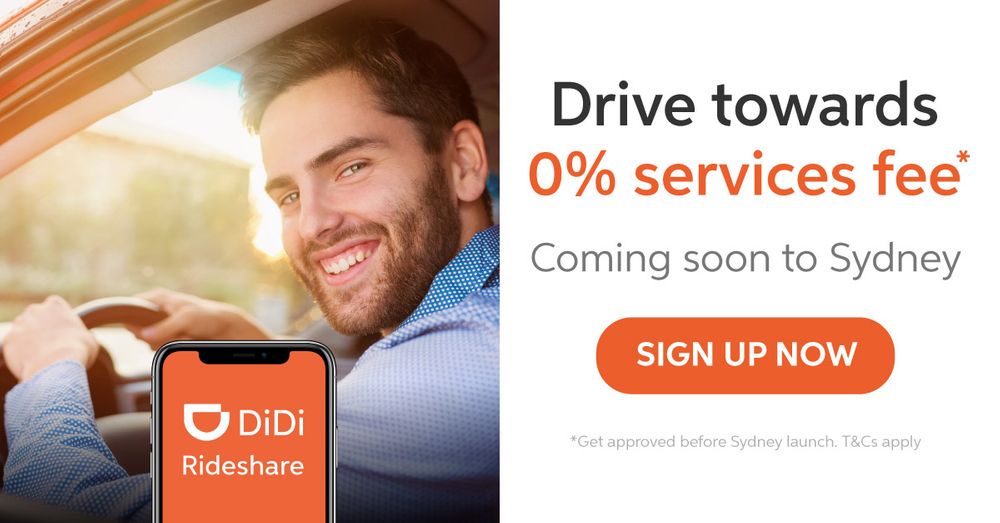 Although Didi has not officially operated in Sydney at the moment, they have opened registration for new driver-partners who want to join their platform. So that when they officially operate here, they will have enough drivers to receive the trip request from riders.

For those who completed the registration and get approved before the launch date in Sydney, the driver will be entitled to get a 5% commission fee. An approved driver could also decrease the fee to the 0% of commission when they refer two new drivers to the platform.

The lower commission promotion only valid for 4 weeks from the launch date. According to the drivers who have completed the registration, Didi will be available in Sydney from March 2020.

After the promotion period ends, the commission fee will be determined based on your performance and level in the Didi Advance Program. A rewards model that applies to driver-partners across Australia including in New South Wales, even Newcastle is the first city where the program is executed.

If you are a Didi driver-partner who is already registered and actively driving in Newcastle, you don’t need to worry because you can still drive in Sydney and get a trip request there.