Tauranga is the biggest city in the Bay of Plenty. This city is only 15 minutes away from one of the most popular beach town in New Zealand, it offers travellers a fantastic sunbathing and sea adventures. You are able to sail, fish, or see dolphins in order to enjoy the coastal environment.

The city centre of Tauranga has some historical areas which are important to be visited if you are travelling to this city.

Ridesharing in Tauranga Airport and the city centre

If in other cities in New Zealand such as in Wellington and Christchurch, you can use more than one ride-sharing application. In Tauranga, there is only one ride-hailing company that operates officially, Uber.

Ride-sharing service is relatively new in this city. Uber just arrived at the beginning of 2018. However, although it’s still new in town, you do not have to worry about not getting a ride because Uber drivers can be found in some spots in town including in Tauranga Airport (TRG).

Maybe you’ll get a ride with a little bit longer waiting time than other big cities in NZ where Uber has been operating for years.

Uber has a fare scheme similar to a conventional cab, it is calculated based on distances, trip times and some other items, only the rate is lower. 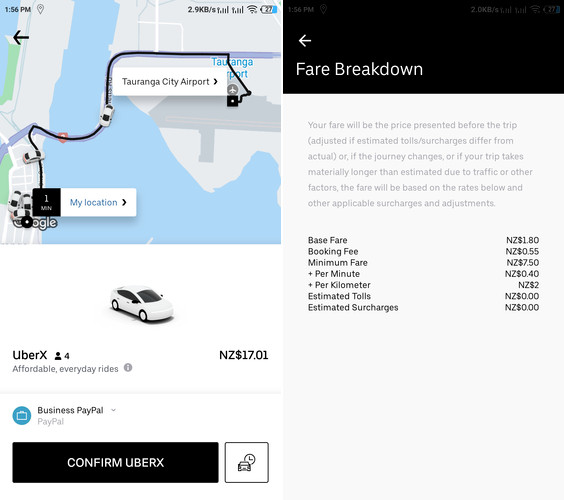 In case you’re interested to hail a private car to move in Tauranga, here is the fare breakdown:

Here is an example of Uber fare from one location to another:

Are you still hesitant to use this ridesharing service in Tauranga? Don’t worry, you can use a coupon or promo code that can be used in the Uber application.

The coupon will deduct the total fare that you have to pay, in other words, you don’t have to pay in full for your ride.

Driving for Uber in Tauranga

Besides being a rider who uses ridesharing service to move into the city, you can also drive for Uber in Tauranga. Since it just operates, they still need some drivers to help them move the city.

With Uber you will get a flexible working time, driving only if you want so you can use your spare time to earn extra income.

Ridesharing as a compliment for Tauranga Transportation

Tauranga is a nice place to spend your vacation days on, but do you know anything about public transport in Tauranga? There are actually lots of public transportation you can ride on in Tauranga, but not many people know about this because of many reasons.

Maybe you are just a backpacker who is visiting Tauranga for the first time or maybe you are someone who is forgetful. No matter the reason, there are still lots of public transportations to choose from.

Bus. Just like many other places, there are buses in Tauranga. Busses are a cheaper alternative to taxis and they are available every day, even in few holidays (just do not expect to ride the busses on Christmas or Good Friday). You can try BayBus that offer 12 bus routes which cover the Tauranga urban area.

Apart from the land taxi, you can ride a water taxi in the city to explore small harbours. Water taxis have a smaller size than vessel boat. This one of public transport in Tauranga that provides travellers scheduled service with small harbours which cannot be reached by Ferry as the destinations.

Ferry.If you want to travel inter-island from Tauranga, you can choose Ferry. It is because several Ferries operate to North Island, South Island, and any other islands in New Zealand. Or you are able to rent a vehicle so that you can explore Tauranga as you will.

Uber. Uber can be found in all places in the world, including New Zealand. There’s no need to go to the bus stop or call a taxi, just open the app and book a ride directly from it. You can see the estimated fare, the location of the car and how long until driver to pick you up in real time.

I need an affordable ride from Tauranga to Whitianga on Friday 18 November (for me and a full carload of things). Suggestions and tips welcome please, as uber is extremely expensive for that distance. Many thanks 🙂