The success of Uber in Australia has led many other rideshare companies to open their services in this country, including an Estonian-based company Taxify who was launched at the end of 2017 and then in 2019 they rebrand itself as Bolt to represent much broader transportation platform, not just the taxi dispatch platform which is their first service.

Bolt (Taxify) is currently only available in the two cities of Melbourne and Sydney, the cities where most of Australia’s population resides. In these two cities, Bolt is not alone, at the beginning they only had to compete with Uber as the main player in the country.

But over time, many global rideshare companies have entered competitions such as Ola and Didi.

To be able to survive and compete in the growing ridesharing market, Bolt must be more creative and continue their promotion efforts to make themself preferred option to other rideshare services. One of the ways to do the promotion is to provide a promo code in Australia, both for new and existing riders.

What is Bolt Promo Code

Bolt (previously known as Taxify) promo code is a code consisting of numbers or letters that can be redeemed to get discounts on ride fares. You can get the codes from anywhere such as from friends, from websites or blogs on the internet.

Most Bolt promo codes that can be redeemed in Australia are worth $13 or $5 depending on where you will use the code. As an illustration, you redeemed a code worth $13, when you book a ride with Bolt for $30. Since you are using a promo code you will only be charged $17 instead of full price.

If you find someone offering a Bolt promo code, chances are what you get is the code for new users. This type of code can only be redeemed when you register as a rider in the Bolt app. You’re also not eligible when you register as a new user by using the same information as other Bolt accounts. In other words, if you’ve taken a ride with them, you’re not eligible to use this kind of code.

Screenshot when the code used. 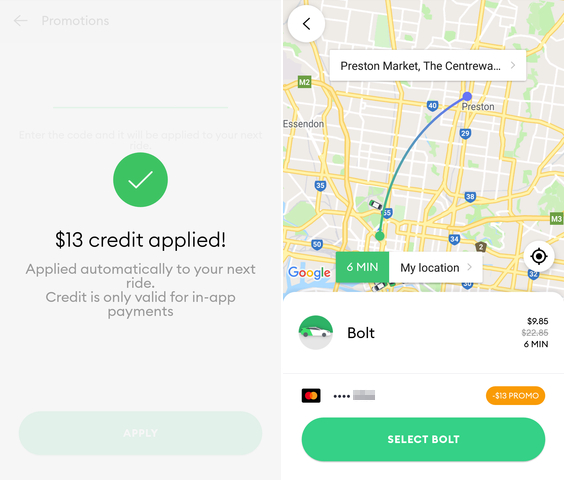 To reward loyal riders who often use their rideshare services, Bolt sometimes provides a special promo code for this kind of existing users. You might rarely find a code like this because it’s usually given exclusively to certain riders via in-app notification or email.

Not only that, sometimes promo codes for existing users are given when Bolt become sponsors of an event in a city, which can be used to come and go home from the event by using their rideshare platform.

Unfortunately, we have not found this kind of promotion (existing Rider code) on the Internet, as it is given in private and limited to certain people. However, we will update this post when we find a new one.

How to Use Taxify Promo Code

To use Bolt (Taxify) promo code is not different from other rideshare app.